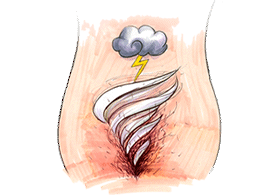 “Consensus amongst my friends seems to be that pubic hair on women is unsightly and unhygienic. Should I shave or wax it off?” Confused, Hairy Down There

DEAR HAIRY DOWN THERE,

Up until the 2000s, pubic hair on people of all genders was accepted as a fact of life. Nude photographs and pornography featured women with full-grown muffs, and most women certainly didn’t spend time worrying about shaving it all off. I remember reading a women’s magazine at the age of eleven (hands up if you sneaked peeks at your mother’s/elder sister’s/cousin’s “grown-up magazines” too) wherein men were polled about what they thought about the new female trend of shaving or waxing the pubic area. I remember that most of them seemed very alarmed. That was in 2002. How times have changed.

It is true that this trend is so deeply rooted that many people who first became sexually active in the last decade or so have been conditioned to find pubic hair unsightly, even ghastly. The eroticism of Gustave Courbet’s 1866 painting L’Origine du Monde, featuring hairy pudenda, seems to have lost much of its original appeal in modern sexual discourse. Pulling up the painting of the female torso on Google Images – the spread thighs, the breast only half-revealed by the lifted white bedclothes, and at the focal point the red cleft peeking out shyly from under the spread thatch of dark hair – I can’t help but feel that this is a loss. It says something about society if we consider pubic hair, an important marker of sexual maturity, unsightly, and compel women through peer pressure to conform to the industry standard: the prepubescent smoothness of a lower torso, completely bare.

Here are some facts about pubic hair, to ground this overly sentimental eulogy. (Also, to dispel that notion that pubic hair is ‘unhygienic’.) Pubic hair protects the vulva from foreign particles and infections; think of it as a wilder, slicker analogue to eyelashes, which do much the same in the way of protection for the eyes. The average life of a pubic hair is six weeks, so if you don’t shave or trim it, it eventually falls off anyway. There’s no need to worry about neglected pubes growing so long they eventually peek out at the world from the hem of your jeans. Lastly, pubic hair may help capture and emit pheromones from the genitals into the air, magnifying the chemical effects that aid sexual attraction. That’s right, pubic hair is sexy.

Nevertheless, there are signs that pubic hair may be coming back into ‘fashion’. In 2010, Crystal Renn posed for Vogue Paris in a shot that revealed a thicket of neatly-trimmed hair over her crotch. Whether this reverse trend latches on or not, remember that there is a bunch of ways to style your pubic hair. There’s shaving, waxing, trimming, or even going au naturel. So don’t feel compelled to do whatever, and go with what makes you feel most comfortable. A useful rule of thumb when it comes to sex, and life in general.