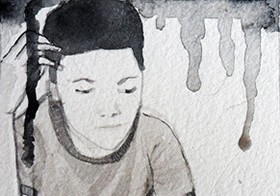 DON’T ALWAYS FIT INTO NEAT PACKAGES.
HERE ARE SOME WORDS TO MAKE SENSE OF IT ALL.

Sexual orientation refers to the gender to which a person is sexually attracted.

It is something that can evolve over one’s lifetime.

We currently do not know what causes each of us to be attracted to a certain gender, and there is no way of telling if a person is gay, straight, or anything else, based on anything other than how they understand their own desires. Some people only realise that they are gay decades into a heterosexual marriage, and some young gay people may find themselves eventually identifying as bisexual (attracted to men and women) or pansexual (attracted to people of all genders). Others identify as queer, which is used by many as an umbrella term for people who are not heterosexual, but people’s preferences for and understandings of this term vary widely.

Then there are asexual people, who do not desire sex (which is distinct from refraining from sexual activity due to personal or religious beliefs). Also, their asexuality does not mean they cannot be romantically attracted to someone else, just that they are not interested in sex. People who are unsure of their sexual orientation sometimes use the labels questioning or curious.

Now, recognising that sexuality evolves is different from saying that it can change. Forcing someone to undergo therapy to become “straight” (also called ex-gay therapy) has been shown to be very harmful psychologically, spiritually and physically.

Biological sex refers to a person’s genitalia. While most people’s genitals are typically male or female, there are also people whose biological bodies do not fit neatly into the male or female classification; these people might be known as intersex.

Gender identity refers to a person’s private sense of, and subjective experience of, their own gender. It has a much stronger bearing on how a person relates to the world and thinks about themselves than their biological sex. For many people, their gender identity matches their biological sex (e.g., a person with female genitals and other typical female bodily characteristics who identifies as a woman), while others experience gender differently.

Some people experience themselves as neither male nor female, or as both. They sometimes call themselves bigender or genderfluid, or genderqueer, among other terms (or even no term at all – many people try to resist labels and classification). Some who feel that their gender identity does not match their biological or “assigned” sex consider themselves transgender (you might see this shortened to trans*, with the asterisk signifying inclusion of many different kinds of trans* people). However, transgender is a wide term that describes many types of people who are not satisfied with their society’s strict definitions of gender and who do not accept a two-gender categorization. Cisgender refers to people whose gender identity aligns with their assigned gender at birth.

Gender identity has no direct bearing on sexual orientation: there are trans people who are straight (e.g. a person who identifies as male who is interested in women) and others who identify as gay, bi, pan, asexual, or queer.

As you can see, sexuality is very complex, dynamic, and even fluid at times. The terms defined in this article are common in many English-speaking countries, although not everyone finds them helpful as identity labels. Of course, terms, concepts, labels and how people choose to identify vary across place and time. We all experience our bodies, gender identities, and sexual attractions (all of the genders we are attracted to) differently, and the least we could do is to include, nurture and respect each other as human beings worthy of love and dignity.